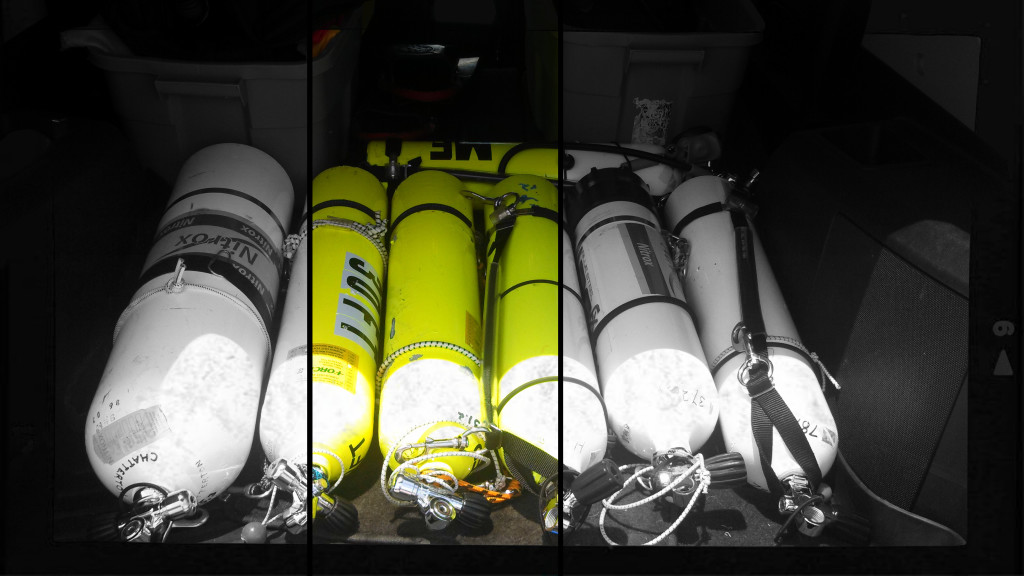 The other day, I joined some friends who were teaching a decompression class for a morning dive.  We were doing the Captain Dan, a dive that I have done many times before, and I planned on shooting video of the students for training purposes.  What made this day different was the current.  It was rippin’, as they say.  The dive master jumped the wreck and upon his return announced the estimated two knot current conditions.  He warned people that if they let go of the line, they would not be able to get back to it; in other words, hang on.  They were doing a split drop and the second group was doing a drift reef dive, so they gave people the option to change their minds and do that instead.  With my experience, I wasn't worried. After all, I once pulled myself down a line to the Lowrance wreck, over 200’ deep, in a significant current.  (Don’t ask why we didn't hot-drop it) I could handle this, no problem…cue ominous music.

After jumping in, I instant realized that this current was, in fact, really rippin’.  I began pulling myself down the line hand over hand, making my way to the wreck.  I made it about 65’ down when I became fatigued.  My arms felt like Jello and my breathing was quick.

Overworking while diving leads to all kinds of problems.

One of the things I learned during my dive training is that overworking while diving leads to all kinds of problems.  In the commercial diving world, they manage over working by just stopping, by “taking a vent”.  In dive training books, they instruct students to “Breath. Think. Act.”  In yoga, it’s called “centering”.  Whatever you call it, I needed a break.  A break to rest, get control of my breathing and assess the situation. 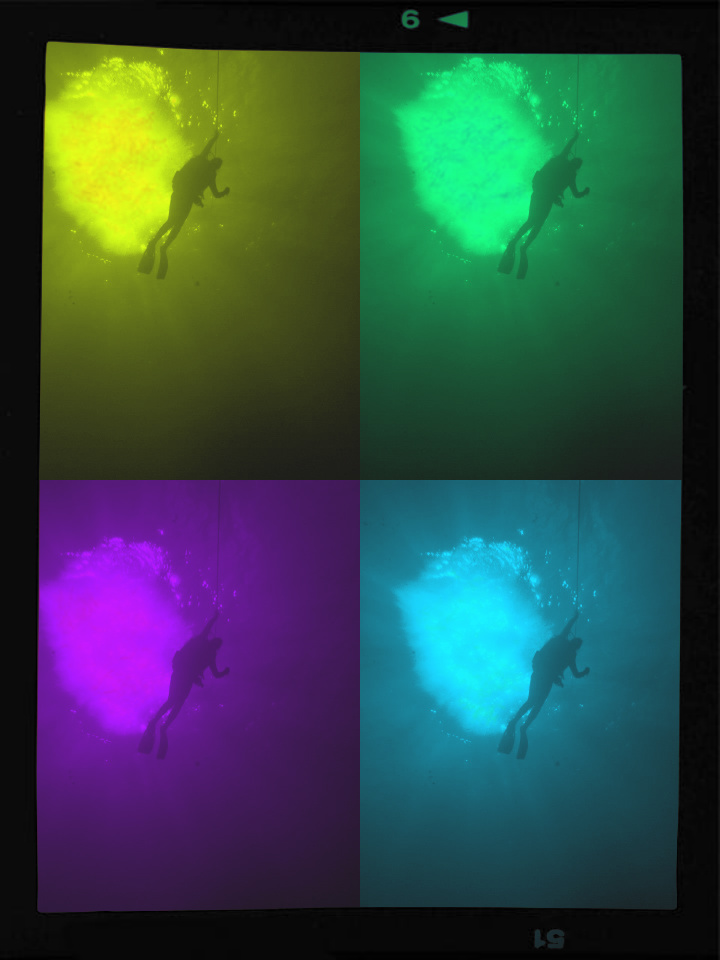 I was about half way and I could barely see the wreck, but if I attempted to pull myself down and I lost my grip, I would drift pretty far before I could make it to the surface.  I wasn’t too worried about that.  I was armed with two SMB’s and I knew how to use them, but the boat was still letting divers off and I’d be drifting for a while.  However, even if I did make it to the wreck, my dive would most definitely be cut short because of the gas consumed during the decent.  Now where is the fun in that?  There was no reason I HAD to do this dive.

I had to be completely honest with myself.  I might have been able to do it in the same conditions on a different day, but today I was not going to make it. I turned the dive and began a safe accent up the line. I passed my friends and husband giving them the OK signal.

On the surface, the boat was still tied in.  There was no granny line to the ladder, so I was instructed to drift to the tag line then pull myself in.  What was going through my head was, “If I had the strength to pull myself to a fixed point in this kind of current, I would have been on the F#@KING wreck right now!”.  However, I gave it a shot.  I made it all the way to the wrong side of the boat ladder, and while I was hanging on for dear life and summoning all the power I had left to make it to the other side, I lost my grip.  I managed to catch the end of the tag line and the crew said they would pull me in.  Attempt #2 at the ladder and we got the same result.  I couldn't pull myself to the right side of the ladder, lost my grip and drifted back.  Hands aching, arms weak, I grabbed the tag line again.  As they pulled the line, it just slipped through my hands…I had exhausted all energy reserves.  At the end of the line, as I strained to maintain my grip, I thought to myself, “Well, now what?  Even if they managed to pull me in, I am too exhausted and weak to pull myself up latter while the boat is stilled tied in.  They need to untie in order to drop the second group anyway.  It will be a lot easier if I and the boat are drifting in the same current.  There was nobody else trying to get back on the boat at that moment” So......I let go.

If I had the strength to pull myself to a fixed point in this kind of current, I would have been on the F#@KING wreck right now!

Immediately after I let go, I gave the boat the “I’m OK, but come pick me up” signal, in which the DM immediately yelled back, “Kick back, we’ll come get you.”  Message received.  I blew my giant SMB to make sure all the other boats in the area could see me, leaned back and waited.

Let me make this clear… I may have been squealing profanities through my regulator the whole time, but I was never panicked.  While I have never been in this kind of situation before, I am well trained.  The training gave me the confidence to evaluate the situation and come up with a solution.  If I lost my grip at 65 feet, I would begin a safe accent to the surface and blow a SMB.  Maybe even blow it on my way up.  If I made it to the wreck but was too winded, I could find a place to duck out of the current and rest.  If I lost the line on the accent, I would blow a SMB and do any necessary decompression stops.

I am a confident and self-reliant diver, but that doesn't mean I have to put myself in dangerous situations.  What makes me a good diver is that I set my ego aside and make the best decision for me.  For me, on this day and this dive, it was calling the dive at 65’.  It was also taking a leap of faith by letting go of the line, and trusting in me, and having confidence in the amazing boat crew.  I wasn't worried.

Whether it’s a line to the boat, an unhappy relationship, or a bad job, letting go is hard to do.  Why are we so willing to hang on to the toxic parts of our lives?  Human nature instinctively tells us to hang on to what we already know, even if it’s not the best for us.  We clutch on to grudges, objects, relationships or anything else, and won’t let go.  (That’s why our houses are filled with so much clutter that we have to pay for storage space)  I knew that the line was attached to the boat, and even though I was too tired to reach the ladder, that is what kept me holding on. 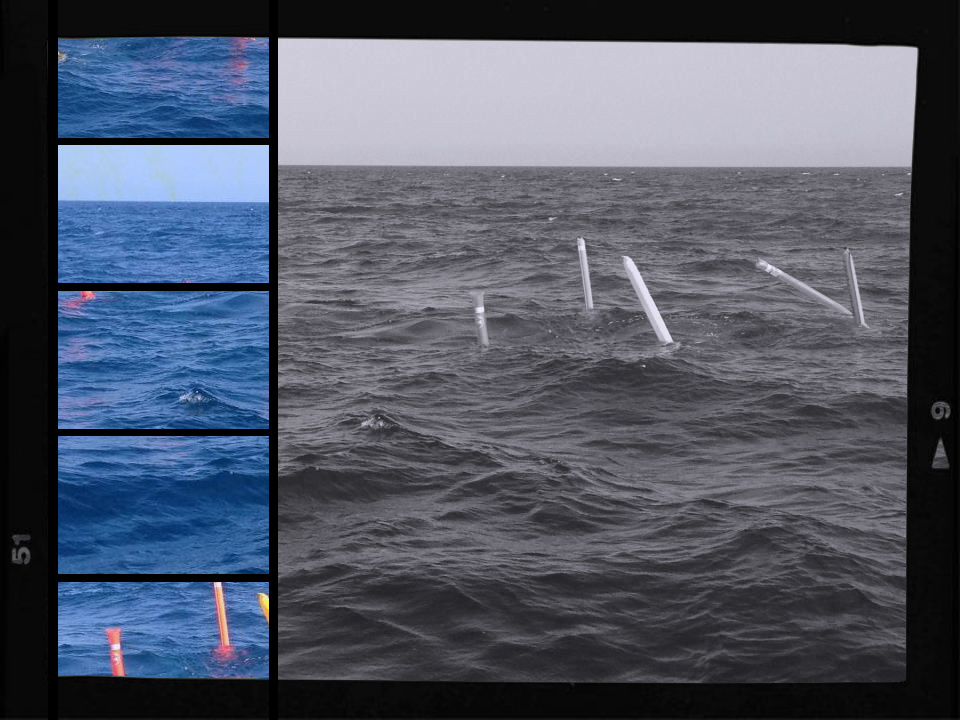 In addition, I had the crew on the boat telling me to “hang on” and “pull myself in”.  Even they believe that clinging onto that line was better for me.  Like they wouldn't be able to find me?!  Social conditioning tells me to follow directions, and I did my best to comply, but they had no idea how tired I really was.  I was way too tired to hold on in that kind of current and attempting to do so could result in injury.  In the end, I had to let my training kick in, while fight just about every natural instinct, and let go.

The few minutes before I let go my body hurt and my mind was stressed.  Once I let go, I was free; it all went away and I knew that I had made the right decision.  I was elated.  Now why didn't I do that earlier?  Oh yeah, it’s because I was afraid of the unknown.  It was because I was too busy listening to someone else who thought they knew better.  How many times does that happen in your everyday life?

Learning to overcome the fear of letting go is something I’ve had a lot of experience with over the past few years.

Learning to overcome the fear of letting go is something I’ve had a lot of experience with over the past few years.  I hung on to less-than-great parts of my life because that is what I already knew.  I wanted a different life, but I was afraid of the unknown and I had everyone telling me I was wrong for wanting it.  So I continued on the same path.  Then one day I heard a different voice telling me I need to do what is best for me.  But first, I needed to let go of the line.  Once I did, I was elated.

Later I heard that someone complained to the boat owner that the crew should have never let them dive.  I find this absurd.  The DM did in fact warn us about the current.  They gave us a choice to do two drift reef dives, which are great in this kind of current.  And, the dive was not impossible for everyone.  The entire deco class, including some other kickass women, managed to make it to the wreck and back safely.  They also had the training to triumph over their natural instincts to later let go of the anchor line, each blow a SMB, and do their deco obligations while drifting.  It was only those untrained, ego driven divers that panicked when they lost the line and rocketed up to the surface.  (They are all fine by the way)  The boat is responsible for many things, but they can’t protect you...from you.  We are all responsible for being properly trained, maintaining a level head, and making the right call for ourselves.  Now I’m not saying you should ignore the instructions of the boat crew, but some days it is better to listen to yourself and just let go.

In the end, I woke up the next day hardly being able to move.  My muscles were so sore!  I felt like I had been hit by a bus, but other than that I was alive and well, and eager to plan my next dive.