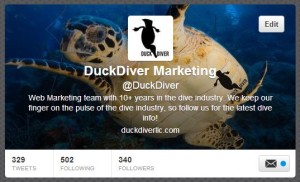 As a marketing consultant, I frequently get the question “What’s this Twitter thing all about?”  To be honest, it wasn't too long ago that I had the same question, and I know I’m not the only marketing professional to feel the same way.  After all, Social Media Marketing is a relatively new medium.   Facebook, created in 2004, is less than a decade old, and Twitter didn't hit the web until 2006!

So Twitter is a young phenomenon, but one that has infiltrated just about every part of our lives.

So Twitter is a young phenomenon, but one that has infiltrated just about every part of our lives.  Even my printer has a twitter account.  Now, if you are scratching your head and wondering what could be said about printing, you’d be surprised.  To them, the world of pantone and paperweight is exciting.  Those that follow them, which consist mostly of clients, designers, and artists, couldn’t agree more…especially when they are tweeting about their projects!  There are now two like-minded people connected and bonding over shared interests no matter where they are in the world….That is the point of Social Media. 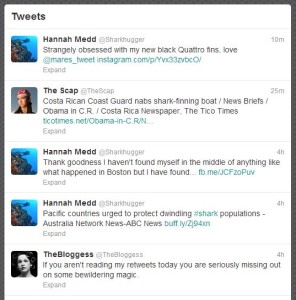 Twitter is not only a place to connect with others; it has become a source for news and a way to get your message out there.  Take, for example, the tragic occurrence of the 2013 Boston Marathon.  If you search #Boston you will see thousands of tweets expressing their condolences, sharing the latest details, officials communicating with the public, even family and friends getting in contact with each other to make sure they are ok.  If this isn’t an impressive example of the power of Twitter, I don’t know what would be.

On a lighter note, Twitter can benefit you and your business by connecting with others that have an interest in your business.  In the dive industry, you can connect in real-time with dive maniacs, those just starting to dip their toes in the scuba world, or even those ocean-lovers that didn’t even know they wanted to scuba.  All this is done in short 140 character messages.

If you post something that just doesn't work, just try something else.
The point is to try.

Much of social media is trial and error.  If you post something that just doesn't work, just try something else. The point is to try.  So, if you are ready to connect with your new tweeps, let me give you a few pointers so you post with confidence...

Information is dispersed in real-time.

Once your message hits the stream, it gets picked up by the current and away it goes.  Posting several tweets a day will ensure your message will be seen more often.  So, don’t be shy about sharing your world.  Did you just pick up a cool new product line?  Are you having a sale?  Did you just scuba certify a couple for their upcoming honeymoon?  Did you just have an amazing marine animal interaction on your last dive?  Well, share it all.

Don’t make it all about you.

Nobody likes that person.  Retweet things that your business believes in, tweets by brands you carry, or anything else in which you’d like to be identified.  For example: DuckDiver is a strong supporter of SUDS, a program in which active wounded military learn to scuba dive as part of rehabilitation.  Whenever SUDS tweets something, I retweet it to all of my followers, thus sharing my interests. 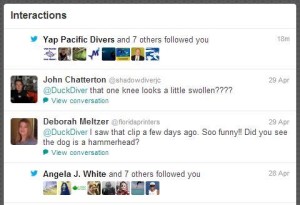 There is a big name manufacturer in which I have regular positive interactions with outside the social media world.  So when I followed them on Twitter, I was expecting some fun communications.  I started tweeting with mentions to them or responding to their tweets, but nothing back.  I’m talking crickets.  What is this dive giant doing wrong?  It’s clear that they are just pushing messages out to Twitter, but not actually spending time there.  They don’t interact with any of their followers, they don’t follow anyone back, they don’t even respond to positive or negative comments about their product.  In my opinion, this is a total fail.

Admittedly, there is a lot to learn about social media, but don’t toil over every tweet.  The good news is social media is a casual atmosphere, so you can relax and have a little fun with it.  Follow @duckdiver, and you'll have at least one friend to start.